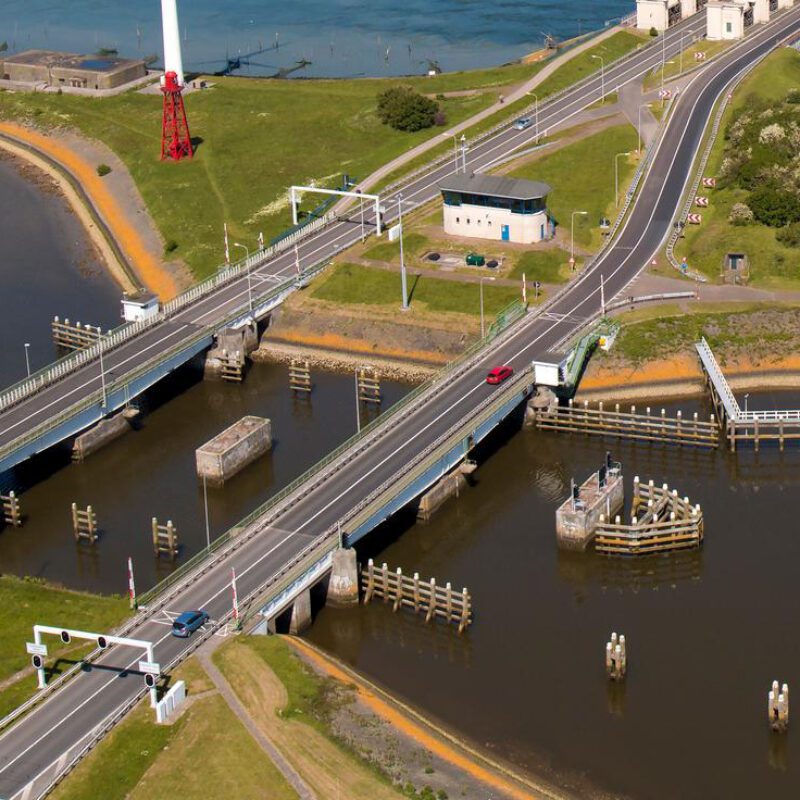 Maintenance of the Den Oever bridges

Future
The swing bridges on the A7 motorway near Den Oever are approaching the end of their operational life. Rijkswaterstaat (The Bureau for integrated Traffic and Transport Studies) will gradually replace the rotational components with road surface and movable parts. In this way, the bridges will remain safe until at least 2050.
Listen

The two swing bridges on the A7 motorway near Den Oever have been in operation as long as the Enclosure Dike. The steel constructions and moveable parts were replaced once in the 1970s. Now some components are approaching the end of their operational life. The steel constructions are suffering from metal fatigue. The moveable part which enables the bridges to turn is worn and overloaded. This makes the bridges less reliable causing an increasing number of breakdowns resulting in traffic jams. For that reason, Rijkswaterstaat is gradually replacing parts of the bridges.
The bridges near Den Oever form part of the monitoring programme of RISK (Rijdek Inspectie Stalen Kunstwerken – Road surface inspection steel infrastructure). In order to guarantee safety, a close eye is kept on the bridges. If needed, repairs are carried out based on our inspections. In the long term, not everything has to be repaired. Because of the planned work, the bridges are guaranteed safe for road users until at least 2050. Afterwards, the Enclosure Dike will be viewed in its entirety, especially in view of the rise in sea level.

In 1921 it was decided to build the Enclosure Dike. This link between Friesland and North Holland created Fortress Holland, the centre of Dutch national defence, which was vulnerable. The War department for this reason constructed casements near the Enclosure Dike. Opting for swing bridges was done in order to defend the dike. The swing bridges made it possible to accurately aim at and shoot the expected enemy from the casements of the Stelling by Den Oever. In addition, the swing bridges were a difficult target for enemy artillery compared to an open bridge. There is no reason to change this construction. Rijkswaterstaat will only replace the moveable components of the bridges with the road surface and the moveable parts. The middle support points in the water, where the bridges rest upon and turn, will be kept. The width of the bridges and the vertical clearance will not be changed.
The project forms part of the Impulse Programme for the Replacement and Renovation project. With this project, Rijkswaterstaat is searching for possibilities in the coming years to manage a large number of bridges, tunnels and locks throughout the whole country and to deal with these problems in a responsible and diligent manner.

Currently, Rijkswaterstaat is working on a design for the swing bridges. Then it will be time to select a contractor to carry out the project. The swing bridges do not form part of the assignment for Levvel, the construction consortium that is currently working on the strengthening and renovation of the Enclosure Dike. The intention is to start with this assignment in 2024 and by 2025, the bridges should be ready.