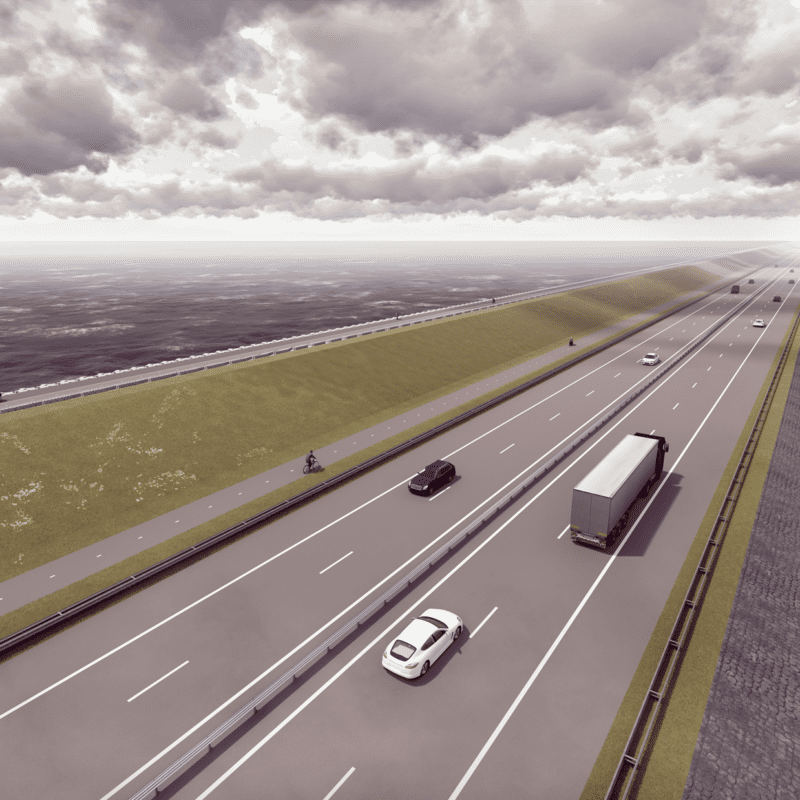 Work in progress
The motorway (A7) on the Afsluitdijk is an important connection between the provinces of North Holland and Friesland. Approximately 20,000 vehicles drive here every day. Since we will be reinforcing and raising the Afsluitdijk, we will also renovate the motorway. There will be broader emergency lanes for increased safety, a new road profile and new asphalt.
Listen

The road must be renovated for the purposes of traffic safety. The road has a small emergency lane with a width of 2.8 metres on both sides, but the current standard is 3.5 metres. Because the road is locked in between the IJsselmeer (also known as Lake IJssel) and the dike, the emergency lanes cannot be widened easily. We create space for broader emergency lanes by reducing the width of  the central reserve, which is possible by placing an innovative guardrail. Because we will be paving the central reserve, it will no longer be able to capture any precipitation (rain, snow, and hail). This water will be drained to the IJsselmeer using a new rainwater discharge system below the road surface.

Because the width of the  central reserve will be reduced and the traffic will be closer to the other lane, a new type of guardrail has been developed specifically for the Afsluitdijk. The design has been tested using various simulations and live crash tests with various vehicles.

We will use Low Energy Asphalt Concrete for the new road profile. This type of  asphalt is produced at a temperature which is over 30 per cent lower than traditionally produced asphalt. This leads to energy savings and a reduction in CO2 emissions.

The work on the road surface has started in 2020. Check the planning of all work on the Afsluitdijk on the home page and find out what this means for traffic on the hindrance page.